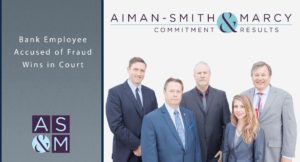 The Termination and Charges.

In January, 2013, Bank of America terminated Salma Aghmane, a vice president, claiming it had “conclusive” evidence of the wrongdoing. The Bank immediately reported her to Arizona-based Early Warning Services L.L.C. – known as “EWS” – which maintained a database of bank employees who were fired for knowingly causing financial loss.  The effect of Banks’ reporting Aghmane to EWS was devastating for Aghmane. Despite the termination, Aghmane, a standout, top-performing employee, was quickly hired in an even better position at Chase Bank. But when it learned that Bank of America had put Aghmane on the EWS criminal blacklist, Chase withdrew its offer leaving Aghmane unemployed for an extended period and ultimately forced to accept a lower-level position with a smaller regional bank.

After two years of litigation. the United States District Court for the Northern District of California granted the Bank of America a partial summary judgment against Aghmane, essentially ending her case.

Winning on Appeal, and at Trial.

On appeal, the Ninth Circuit overturned the judgment for the Bank of America, finding that a reasonable jury could determine that Bank of America either knew or should have known that it had no more than a dispute and did not have “conclusive evidence” that Ms. Aghmane had committed a criminal act.

The case proceeded to trial in the Northern District in Oakland.  In his summation, Ms. Aghmane’s attorney, Randall Aiman-Smith, called The Bank of America a “great big barrel-chested bully.” He pointed to the bank’s  “grossly inadequate” fraud investigation that ruined Aghmane’s earning potential and blacklisted her from “the major leagues of banking,” destroying a successful and lucrative banking career.

The jury sided with Aghmane finding the bank liable for defamation, blacklisting, and negligent infliction of emotional distress. The jury awarded Ms. Aghmane more than half a million dollars in damages and also determined that the Bank of America acted with malice and therefore was liable for punitive damages as well.  The night before the jury was to begin deliberating on the amount of punitive damages, the case settled for a confidential amount.

Aiman-Smith & Marcy are employment law, consumer fraud, and class action attorneys who provide a multi-dimensional perspective to each case. We view each case as a partnership between ourselves and you, the client. Please contact us to learn more.

If you believe you are a victim of workplace discrimination, harassment, or retaliation, contact Aiman-Smith & Marcy for a free consultation. Our Oakland workplace discrimination and harassment lawyer can help you understand your rights and determine the best option for pursuing justice. Let us help you fight for your rights and preserve your dignity.

After a break to pursue my major in art history, I went to UC Hastings College of Law and continued working with Randall and Reed. Having worked together now for 20 years, we have a unique ability to work collaboratively and finish each other’s sentences. I have strived throughout my career to make a difference in the lives of our clients. At the end of the day, if I am helping someone to get compensation for losses they suffered, then I know that all the work put into a case has been worth it.