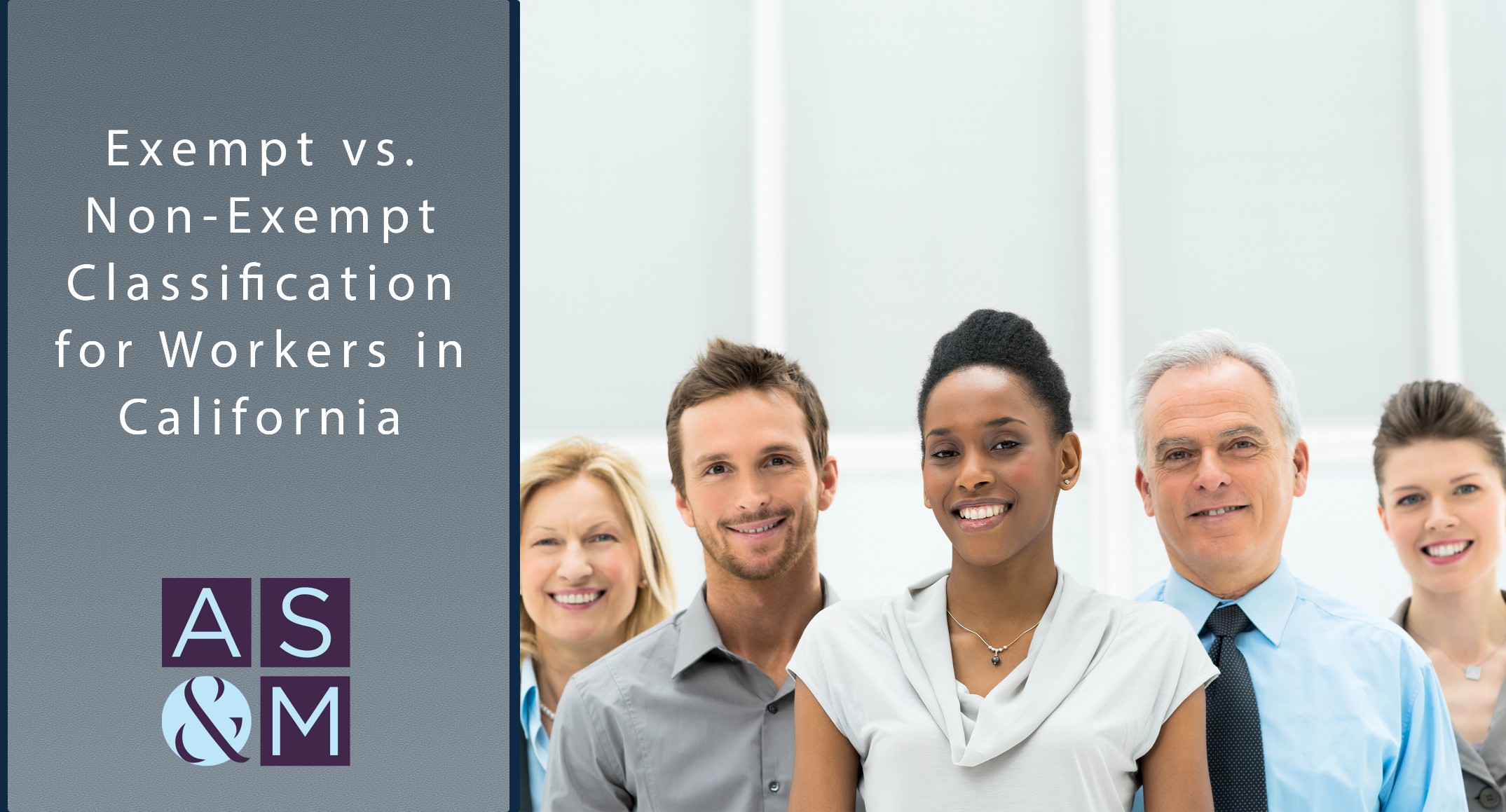 Although there are labor laws in California designed to shield workers from unfair conditions, misclassification of work status remains a widespread problem that leaves many workers unable to benefit from the state’s rules and regulations. Many workers in the state are incorrectly labeled as either an exempt or non-exempt employee, leaving them vulnerable to exploitation and causing them to miss out on the protections of California labor laws. With confusion surrounding the complex topic running rampant, here is a breakdown of the benefits of exempt and non-exempt employee classification.

Wages and rate of pay:

Whether you should be classified as exempt or non-exempt mostly comes down to your hours and wages, as both California and federal labor laws give guidelines about your expected rate of pay for either scenario. In particular, managers who regularly go beyond 40 hours a week need to know their classification and rate of pay to ensure that an employer is following labor laws. For California, an exempt employee is expected to earn at least $43,680 per year, or two times the monthly salary of a full-time employee earning minimum wage, ostensibly guaranteeing an appropriate rate of compensation for employees.

Which one is better?

One of the reasons for confusion when it comes to exempt versus non-exempt status is because it can be complicated to calculate which status would be beneficial for the worker. Exempt employees often are expected to go well beyond what is considered a typical work week, opening up the possibility of a considerable decline in hourly pay, or outright exploitation in extreme cases. However, because exempt employees are guaranteed a set salary, it can make financial planning easier and does make sense for many workers. Additionally, there tends to be a greater sense of flexibility, as exempt workers aren’t as tied to the clock and often exercise more autonomy when it comes to breaks as well as start/stop times.

For a non-exempt worker, however, there is also a guarantee that you won’t see a significant decrease in hourly rate the more hours in a week that you work. On the contrary, non-exempt workers will frequently request to work more overtime hours to provide a spike in hourly compensation for the week. While an exempt worker is under pressure to finish a project or assignment in a given period of time to avoid a drop in hourly pay, a non-exempt employee knows precisely how much he or she is getting paid at all times. In fact, many exempt employees don’t even fully realize how much their hourly rate falls with extended overtime work, although there often is a general sense of elevated status for exempted/salaried employees. Whichever category you fall into, the laws are designed to protect you and ensure acceptable compensation if you put in long hours.

Any employee who does not have a basic understanding of California labor laws is potentially at risk of losing out on the full benefits of employment, although exempt status typically applies to managers, administrative personnel and professionals such as teachers, physicians and lawyers, among others. If you are an exempt employee living in California, your salary should be at least $43,680 for the year based on the $10.50 minimum hourly wage for the state, which will actually increase further as California moves to $11/hour in 2018. Learning about FLSA exclusions as well as the ongoing changes in the California minimum wage can give you a head start in ensuring that you are being correctly classified and compensated.

What should you do if you think you are misclassified?

Learning about the basics of California labor law relating to work status is an essential part of avoiding being misclassified, although the complexity of the process can still leave workers unprotected without further assistance. For an affected worker concerned about exempt versus non-exempt status, obtaining a free consultation from the experts of Aiman-Smith & Mercy can be an invaluable experience that can ensure that you are receiving the full protections and benefits of California state law.